The Centers for Medicare and Medicaid Services (CMS) released its final report for the 2017 Affordable Care Act (ACA) enrollment period (including additional data) this past week.

The data shows that Nebraskans continue to value and benefit from the quality insurance provided through the ACA, even amidst the national uncertainty surrounding the law.

Nebraska enrolled 84,371 individuals in health coverage through the Health Insurance Marketplace this open enrollment period, as part of a national total of 12.2 million Americans (nearly as many as 2015-16).

Overall, that is a strong showing for a maturing marketplace. Below are some details from the report that we think merit mention.

Nebraskans purchased plans with an average of premium cost of $595 per month with an average tax credit of $462. That makes the average cost to consumer around $133 per month, up $28 from last year. For Nebraskans, this shows that the system worked given that as premiums rise, the subsidies rise with them, filling the gap. This year, Nebraska led the country in the number of individuals who enrolled receiving tax credits with 91%. The national average was just under 83%.

Compared to the rest of the country, Nebraska had a similar proportion of new enrollees with a somewhat greater number of active renewals (people with Marketplace plans from previous years who chose a new plan this year).

Passive renewals – when people were re-enrolled automatically in their same plan from a previous year – were much smaller in Nebraska. 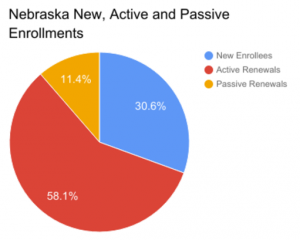 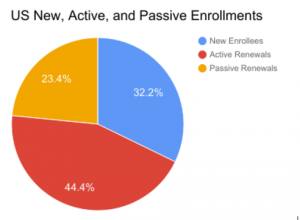 Broad groups benefitted from the Affordable Care Act in Nebraska. Below are several tables comparing Nebraska, the national average, and our neighbor to the east, Iowa.

The above data shows that Nebraska’s market looked much more like economists hoped the entire country would with more young people enrolled compared to older. This ensures that there is a good mix of younger, healthier people, and older adults who may have greater health needs.

It’s interesting to note that the highest proportion of enrollees in Nebraska were in the 100-150 percent of the Federal Poverty Level (FPL) bracket. This follows the national trend, but not so for Iowa. The ACA increases subsidies for people with lower incomes, and this chart shows that those with the most need were the most likely to purchase coverage.

Nebraska additionally enrolled a much greater percentage of rural consumers compared to the rest of the country and Iowa.

In looking at the enrollment numbers over time, there is an interesting dip in Week 12 (January 14-21, 2017) this period that deserves some further exploration.

In one week, we saw a cumulative drop of more than 6,000 Nebraskans who had coverage through the Marketplace in Week 12 (86,711 reported in Week 11 to 81,230 in Week 12). This happened to coincide with the new administration’s inauguration and had quite a dramatic effect. 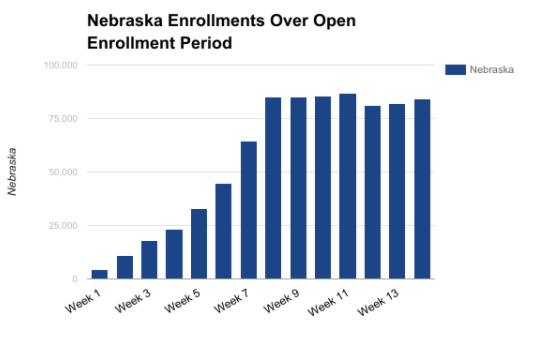 The Affordable Care Act has helped millions of Americans find affordable health coverage over its seven-year existence. Not only has this law benefitted the more than 84,000 people with plans purchased in Nebraska on Healthcare.gov, but it has also benefitted everyone else in the country with common-sense insurance protections and requirements that improve the quality of care.

The law could be made stronger so it can help even more Americans, so we hope to see it improved and not ended. This most recent report shows that there are enormous positive impacts that cannot be ignored.