This is a guest post from Enroll Nebraska intern Elsa Knight. 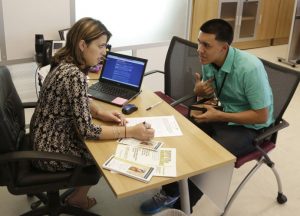 Chances are you know someone who is uninsured, and the discussion of how to help the uninsured continues. However, some good news arrived in the form of some recent statistics that show the uninsured rate has decreased rapidly in the U.S. This will let health care assisters focus more on the remaining Nebraskans who still need affordable coverage.

Two big pieces of data came out recently: An article from Vox citing National Center for Health Statistics (NCHS) data, and a U.S. Census report both report that fewer Americans are uninsured than ever before.

According to Census data released September 13, the rate of Americans without health insurance fell to 9.4 percent in 2015, which is the lowest rate the government has on record. This is a dramatic drop from the 2013 level of 14.5 percent. That’s an increase of 15 million Americans over two years who now have health insurance.

10.8 million Americans are being covered by private plans obtained through the Health Insurance Marketplace, including over 87,000 Nebraskans. This is a 3.6 percent increase from 2015. However, uninsured rates are still higher for those between the ages of 25 to 34. 15.9 percent of adults ages 25 to 34 lack health insurance, compared with 8.1 percent of adults ages 45 to 64.

While the uninsured rate has fallen overall in the past couple of years, there is still much work to do in helping those people struggling to get health insurance.

If you still need help finding health insurance, you can get free in-person help to find an affordable health plan by visiting enroll-ne.org/local, or by calling the United Way’s free 2-1-1 referral center.

Let’s push cut the uninsured rate even lower and help every Nebraskan get the affordable health insurance they need!